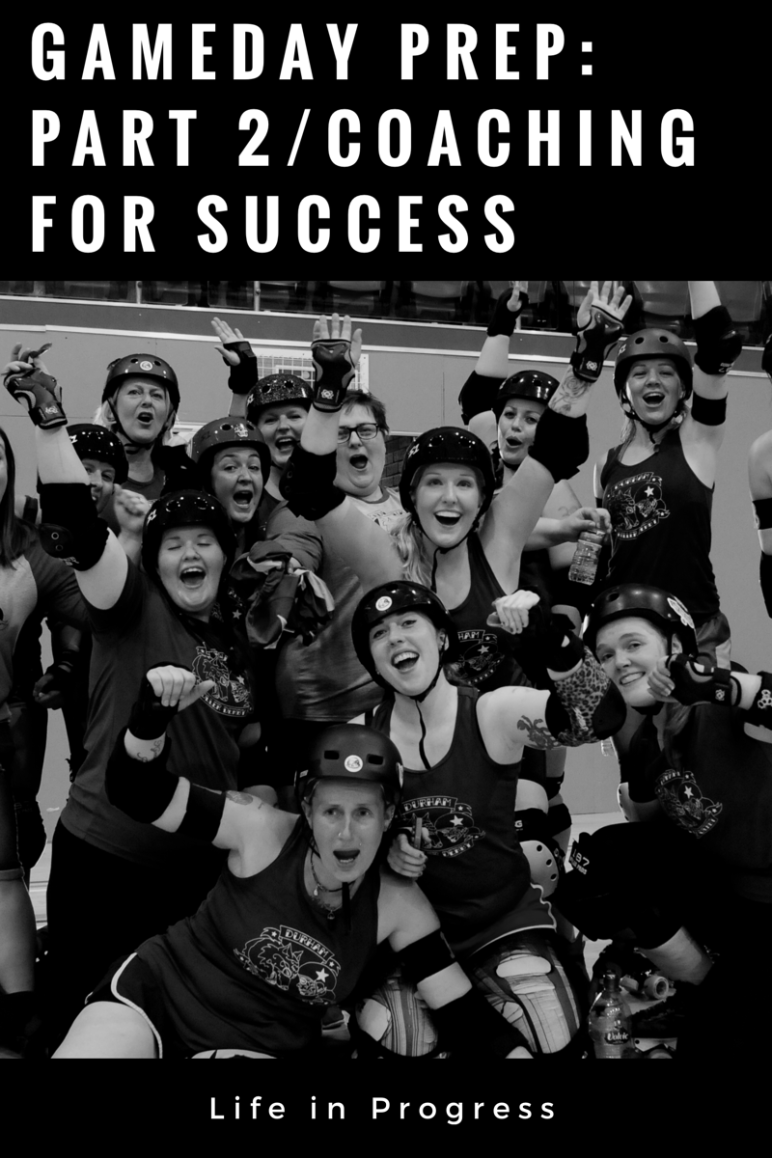 Game days can be a super enjoyable experience – yes it can also be quite stressful – but if you prepare well as a team it will reduce all the negative thoughts and feelings.

So how do you get the team on the road to feeling like ‘we got dis’ and as a coach how can your style impact on the team?

For me it’s about keeping and breeding that positive mental attitude. Negativity is known to breed negativity, so by training it out of the team you can totally 180 your whole teams’ mental attitude…

So how do you do that – how do you stay positive for a team of 20 or more people who have all sorts of other life stuff going on, on top of roller Derby?

Consistency and successes. Setting up a player, or the team for a failure in the run up to a game will begin to bring that negative mindset forward. Everyone wants to win the drill, so by running drills that allow the players to get that ‘win’ is a big part of my method to coaching.

Don’t get me wrong it doesn’t and can’t work in every scenario/strategy/sequence but in the run up to a game I stay on pattern and run the same variations of drills for the two weeks to the first whistle, based on focus areas that we need to cane and perfect. I find that any progression will come from natural escalations from the players being driven to make it harder for themselves. Which in turn allows development of the drills at a later date.

For example, the past few sessions I’ve run were based on building confidence and technique with blocking style, as a wall, as smaller groups and individually. The players have gone back to the basics and built from there. Going over old ground with footwork, plows, Hockey Honey and recapping a few newer things. Every player has pushed to make the basic drills harder for themselves but they also come out of it with that mental win – they can do it, the goal from their is to simply do it better and do it during a game.

I also encourage structured feedback time as a group, for me it helps to make sure everyone has a good understanding of why we did the thing, and how them doing the thing supports the team. After running a set of drills I regularly ask the team (and I think they’re sick of me saying it) to think about what went ‘good, bad or indifferent’. They get around 3-5 minutes to discuss variations or tips they felt helped them, and it also ﻿gives the coaching team a chance to give feedback as to what they saw working well within the group.

Then I run it again, I repeat this at least once but if I see strong development I’ll do it twice. Because if it’s working it’s good for muscle memory and everyone who didn’t get it the first time round definitely gets it the second time. I like it when I can finish a drill and say that everyone showed improvement, development or nailed it.

And I think it’s working (we’ll find out on the 29th), as everyone seems to have developed a ‘we got this’ mindset. After sessions the feedback from the group is positive and we all seem to be on the same page.

Here’s to the little victories!﻿